Question 3
The partial output displayed in the exhibit is a result of what IOS command? (Click on the Exhibit(s) button.)

Question 4
You have been assigned to create a plan to implement HSRP on the router connecting your company's network to the Internet. The router should be the active router in the HSRP group. On the active router, the following conditions should be met:
Enable preemption with no delay
Set Hello timer to 10 seconds and hold time to 25 seconds
Set the priority to 150
Which of the following commands should be included in the plan to meet the given requirements? (Choose all that apply.)

Question 5
Which of the following statements best describes the result of issuing the command standby 44 timers 3 1 on an HSRP router?

Question 6
Refer to the following exhibit: 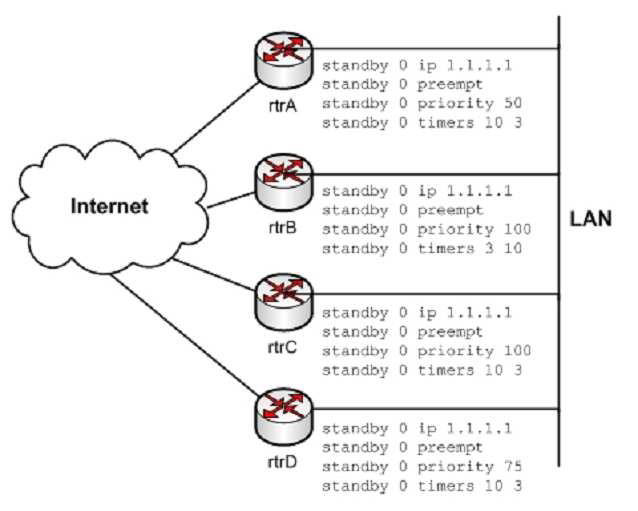 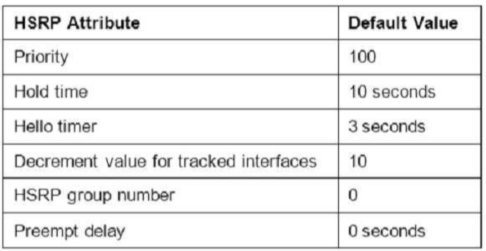 Question 7
A company has the following network infrastructure. (Refer to the exhibit.) 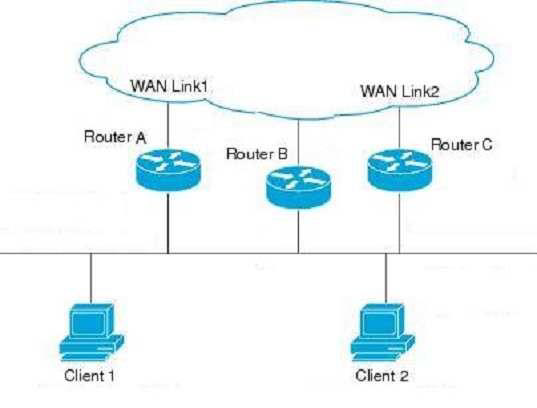 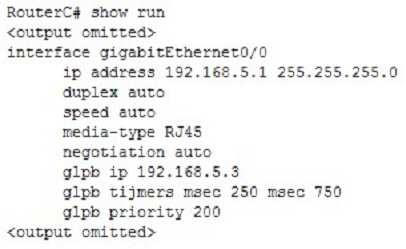 Question 8
In which HSRP state is the router a candidate to become the next active router for the group?

Correct Answer: B
Virtual Router Redundancy Protocol (VRRP) enables a group of routers to form a single virtual router, known as a VRRP group. Routers are configured in VRRP groups to provide redundancy for a virtual IP address shared among members of the VRRP group. Each group is comprised of a master router and one or more backup routers. The physical IP address of the master router will be the virtual IP address of the group.
The master router is responsible for forwarding packets sent to the virtual router. The backup routers provide redundancy and stand ready to assume the role of the master router in the event that the master is unable to forward packets.
Objective:
Infrastructure Services Sub-Objective:
Configure and verify first-hop redundancy protocols
References:
Cisco > Cisco IOS IP Application Services Configuration Guide, Release 12.4 > Part 1: First Hop Redundancy Protocols > Configuring VRRP

Question 10
Which of the following is required to allow load balancing between three HSRP routers connected to the same LAN?

Correct Answer: E
You should configure three HSRP groups on all three routers and select an active router for each of the groups. You can create up to 256 (0 to 255) groups. Each router should be the active router for one of the three groups and the standby router for the remaining two groups.
If you want to use HSRP on a Layer 3 switch, the switch ports must be one of the following:
EtherChannel port Refers to a Layer 3 switch port used for EtherChannel
Routed port Refers to a Layer 3 port on a switch used for routing and for inter-VLAN routing
Switch virtual interface (SVI) Refers to a Layer 2 switch port used for inter-VLAN routing
Routed ports are the physical Layer 3 interfaces that allow you to configure a switch as a router. The no switchport command allows the port to be used purely as a Layer 3 port. SVIs are Layer 3 logical interfaces of a switch that allow you to enable inter-VLAN routing on Layer 3 switches. An SVI is configured as a VLAN interface and has at least one physical interface assigned to the VLANs.
Creating a single HSRP group with all three routers as active routers for the group is incorrect. An HSRP group cannot have multiple active routers; it can have only one active router at a time.
Creating a single HSRP group with one active router for the group is incorrect because it does not allow load balancing between the three routers. All traffic will be passed through the active router.
Creating two HSRP groups with an active router each is incorrect because it only allows load balancing between two of the routers and not three of them.
Creating two HSRP groups with one active router for both groups, or three HSRP groups with one active router for all groups, is incorrect. Doing so does not enable load balancing on all three routers. Only the active router will be used for traffic forwarding.
Objective:
Infrastructure Services Sub-Objective:
Configure and verify first-hop redundancy protocols
References:
Internetworking Case Studies > Using HSRP for Fault-Tolerant IP Routing > Configuring Multiple Hot Standby Groups > Load Sharing
Catalyst 3750 Switch Software Configuration Guide, 12.2(40)SE > Configuring HSRP > Configuring HSRP > HSRP Configuration Guidelines Catalyst 3750 Switch Software Configuration Guide, 12.2(40)SE > Configuring HSRP > Configuring HSRP > Multiple HSRP