Question 1
A customer uses an SIP application that is not supported by Aruba United Communications and Collaboration (UCC). Which voice deployment mode should the administrator implement on Aruba Mobility Controllers (MCs) to support this application?

Question 2
A company has a wireless network that contains a cluster of four Aruba 7030 Mobility Controllers (MC) managed by a Mobility Master (MM) located in the data center. The company has Aps deployed that are nearing the capacity of the cluster. The administrator wants to increase AP capacity.
How can the administrator solve the problem?

Question 3
An Administrator supports a group of employees that connect to the corporate office using the VIA client. An Aruba Mobility Controller (MC), behind a corporate firewall, terminates the user’s VPN sessions. The VPN sessions fail to establish because of the existing firewall rules.
Which connections must the administrator allow on the firewall? (Choose three.)

Question 4
Refer to the exhibit. 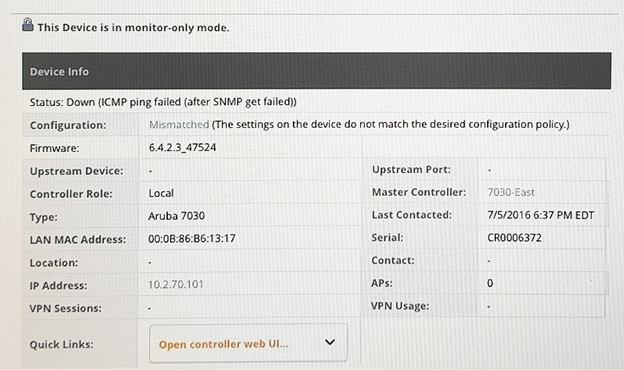 Under which AirWave Management Platform (AMP) section should an administrator navigate to see the connection status between the AMP and managed device shown in the exhibit?

Question 5
A group of users on the same floor of a campus residence experience connectivity problems continuously throughout the morning. The administrator suspects that it is a L1 problem with physical interference.
What can the administrator do to find the cause of this problem?

Question 8
An administrator wants to reduce downtime of the wireless network when controllers are upgraded. Which Aruba OS feature should the administrator implement to reduce the amount of downtime the Aps will experience at the time of the upgrade process?

Question 9
Refer to the exhibit.

The branch office RAP shown in the exhibit provides secure wireless employee access. Because of security concerns, the company’s security policy does not allow wireless guest access. Some customers that visit the Branch office need Internet access. A RAP’s Ethernet Port 3 is used for wired guest access and Port2 is used for wired employee access. When employees connect to Port2, they are authenticated successfully and split-tunnel policy allows them access to both corporate and Internet resources from the Branch office. Guest users, however, cannot access Internet resources on Port 3.
How can the administrator provide guest users internet access?

Question 10
Refer to the exhibit. 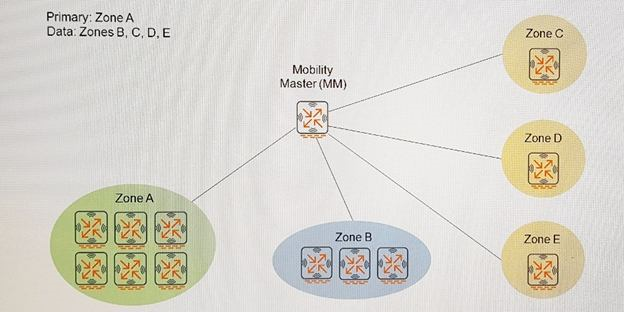 An administrator implements the MultiZone feature. The administrator sets up five zones as shown in the exhibit in this configuration:
Zone A has six controllers that form a cluster.
Zone B has three controllers that from a cluster.
Zones C, D, and E have a single standalone controller each.
A total of 13 VAPs are created across the five zones, Aruba Mobility Controllers (MCs) in Zones A, B and C run ArubaOS 8.1.0.1 MCs in zones D and E run ArubaOS 8.1.0.2. Some APs do not join their respective data zones.
What could cause this problem?