Question 1
When a wired client connects to an edge switch in an SDA fabric, which component decides whether the client has access to the network?

Question 2
Refer to the exhibit.
An engineer must ensure that all traffic leaving AS 200 will choose Link 2 as the exit point. Assuming that all BGP neighbor relationships have been formed and that the attributes have not been changed on any of the routers, which configuration accomplish task? 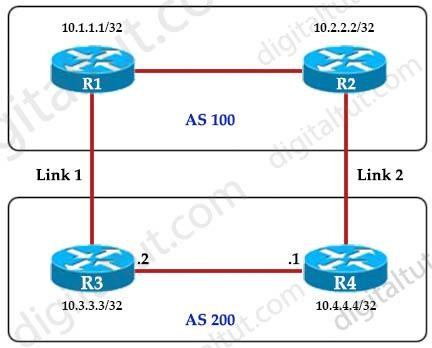 Question 3
What NTP stratum level is a server that is connected directly to an authoritative time source?

Correct Answer: B
The stratum levels define the distance from the reference clock. A reference clock is a stratum 0 device that is assumed to be accurate and has little or no delay associated with it. Stratum 0 servers cannot be used on the network but they are directly connected to computers which then operate as stratum-1 servers. A stratum 1 time server acts as a primary network time standard. 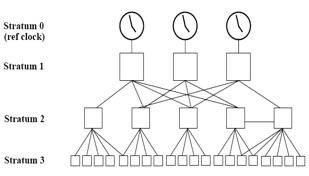 Correct Answer: B
Traffic shaping retains excess packets in a queue and then schedules the excess for later transmission over increments of time. The result of traffic shaping is a smoothed packet output rate. 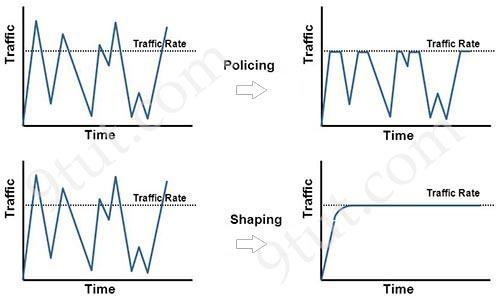 Question 5
An engineer is describing QoS to a client. Which two facts apply to traffic policing? (Choose two)

Correct Answer: CE
Traffic policing propagates bursts. When the traffic rate reaches the configured maximum rate (or committed information rate), excess traffic is dropped (or remarked). The result is an output rate that appears as a saw-tooth with crests and troughs.
Unlike traffic shaping, traffic policing does not cause delay.
Classification (which includes traffic policing, traffic shaping and queuing techniques) should take place at the network edge. It is recommended that classification occur as close to the source of the traffic as possible.
Also according to this Cisco link, policing traffic as close to the source as possible.

Question 6
What mechanism does PIM use to forward multicast traffic?

Correct Answer: A
PIM dense mode (PIM-DM) uses a push model to flood multicast traffic to every corner of the network. This push model is a brute-force method of delivering data to the receivers. This method would be efficient in certain deployments in which there are active receivers on every subnet in the network. PIM-DM initially floods multicast traffic throughout the network. Routers that have no downstream neighbors prune the unwanted traffic. This process repeats every 3 minutes.
PIM Sparse Mode (PIM-SM) uses a pull model to deliver multicast traffic. Only network segments with active receivers that have explicitly requested the data receive the traffic. PIM- SM distributes information about active sources by forwarding data packets on the shared tree. Because PIM-SM uses shared trees (at least initially), it requires the use of an RP. The RP must be administratively configured in the network.
Answer C seems to be correct but it is not, PIM spare mode uses sources (not receivers) to register with the RP. Sources register with the RP, and then data is forwarded down the shared tree to the receivers.
Reference: Selecting MPLS VPN Services Book, page 193

Question 7
Which First Hop Redundancy Protocol should be used to meet a design requirements for more efficient default bandwidth usage across multiple devices?

Correct Answer: A
The main disadvantage of HSRP and VRRP is that only one gateway is elected to be the active gateway and used to forward traffic whilst the rest are unused until the active one fails. Gateway Load Balancing Protocol (GLBP) is a Cisco proprietary protocol and performs the similar function to HSRP and VRRP but it supports load balancing among members in a GLBP group.

Question 8
Refer to the exhibit.

A network engineer is configuring OSPF between router R1 and router R2. The engineer must ensure that a DR/BDR election does not occur on the Gigabit Ethernet interfaces in area
0. Which configuration set accomplishes this goal?

Correct Answer: A
Broadcast and Non-Broadcast networks elect DR/BDR while Point-to-point/multipoint do not elect DR/BDR. Therefore we have to set the two Gi0/0 interfaces to point-to-point or point- to-multipoint network to ensure that a DR/BDR election does not occur.

Question 9
What are two reasons why broadcast radiation is caused in the virtual machine environment? (Choose two)

Correct Answer: AC
Broadcast radiation refers to the processing that is required every time a broadcast is received on a host. Although IP is very efficient from a broadcast perspective when compared to traditional protocols such as Novell Internetwork Packet Exchange (IPX) Service Advertising Protocol (SAP), virtual machines and the vswitch implementation require special consideration. Because the vswitch is software based, as broadcasts are received the vswitch must interrupt the server CPU to change contexts to enable the vswitch to process the packet. After the vswitch has determined that the packet is a broadcast, it copies the packet to all the VMNICs, which then pass the broadcast packet up the stack to process. This processing overhead can have a tangible effect on overall server performance if a single domain is hosting a large number of virtual machines.
Note: This overhead effect is not a limitation of the vswitch implementation. It is a result of the software-based nature of the vswitch embedded in the ESX hypervisor.
Reference: https://www.cisco.com/c/en/us/solutions/collateral/data-center- virtualization/net_implementation_white_paper0900aecd806a9c05.html
-------------------------------------------
Note about the structure of virtualization in a hypervisor:
Hypervisors provide virtual switch (vSwitch) that Virtual Machines (VMs) use to communicate with other VMs on the same host. The vSwitch may also be connected to the host`s physical NIC to allow VMs to get layer 2 access to the outside world.
Each VM is provided with a virtual NIC (vNIC) that is connected to the virtual switch. Multiple vNICs can connect to a single vSwitch, allowing VMs on a physical host to communicate with one another at layer 2 without having to go out to a physical switch.

Although vSwitch does not run Spanning-tree protocol but vSwitch implements other loop prevention mechanisms. For example, a frame that enters from one VMNIC is not going to go out of the physical host from a different VMNIC card.

Question 10
A company plans to implement intent-based networking in its campus infrastructure. Which design facilities a migrate from a traditional campus design to a programmer fabric designer?

Correct Answer: C
Intent-based Networking (IBN) transforms a hardware-centric, manual network into a controller-led network that captures business intent and translates it into policies that can be automated and applied consistently across the network. The goal is for the network to continuously monitor and adjust network performance to help assure desired business outcomes. IBN builds on software-defined networking (SDN). SDN usually uses spine-leaf architecture, which is typically deployed as two layers: spines (such as an aggregation layer), and leaves (such as an access layer). 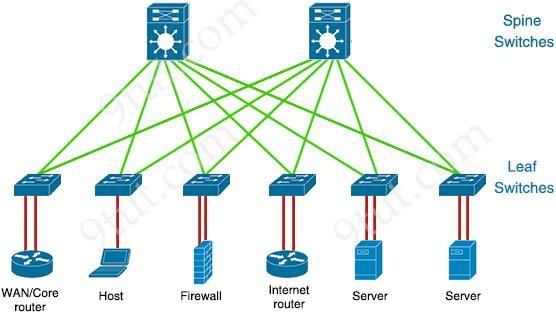