The IPv6 router does not have 10.176.15.131 as its IPv4 address. The 10.176.15.131 address is the IPv4 equivalent of the second and third quarter (05B0:0F81)
in the source IPv6 address.
The other two IPv4 addresses are incorrect as they pertain to neither of the two IPv6 hosts.
Objective:
Network
Principles Sub-
Objective:
Recognize proposed changes to the network
References:
Cisco IOS IPv6 Implementation Guide > Implementing Tunneling for IPv6

Question 2
You have recently joined a company as the network administrator. You have been asked to complete the configuration on the border routers for an automatic 6-to- 4 tunnel between several IPv6 network domains.
The commands that are currently configured on the routers are as follows:
ipv6 route tunnel
interface tunnel
ipv6 address
tunnel source
Which of the following additional commands is required to complete the configuration of automatic 6-to-4 tunnel on the border routers?

Correct Answer: B
The correct answer is to use the tunnel mode ipv6ip 6to4 command to complete the configuration of an automatic 6-to-4 tunnel. This command requires the use of IPv6 unicast addresses that have the 2002::/16 prefix.
The types of tunneling mechanisms supported by IPv6 are:
Automatic 6-to-4 tunnel
ISATAP tunnel
Manually configured tunnel
GRE tunnel
Apart from using a tunneling mechanism, interoperability between IPv4 and IPv6 can be provided by using a dual-stack infrastructure or Network Address Translation-Protocol Translation (NAT-PT). A dual-stack infrastructure allows you to use both IPv4 and IPv6 addresses on the same router/host. NAT-PT is used to translate IPv4 addresses to IPv6 and vice versa.
The tunnel mode ipv6ip command should not be used to complete the configuration because this command specifies IPv6 as the passenger protocol and creates a manually configured tunnel.
The tunnel mode ipv6ip auto-tunnel command is not required to enable automatic 6-to-4 tunneling on the border routers. This command creates an automatic IPv4compatible IPv6 tunnel between the routers.
The tunnel mode ipv6ip isatap command should not be used because this command creates an ISATAP tunnel.
Objective:
Network
Principles Sub-
Objective:
Recognize proposed changes to the network
References:
Cisco IOS IPv6 Configuration Guide; Implementing Tunneling for IPv6 > Configuring Manual IPv6 Tunnels Cisco > Cisco IOS IPv6 Command Reference > tunnel mode ipv6ip

Question 3
You have implemented IPv6 automatic 6-to-4 tunneling between three IPv6 subnets as shown in the network exhibit. (Click the Exhibit(s) button.)

You have used the following commands to implement the automatic 6-to-4 tunnel: 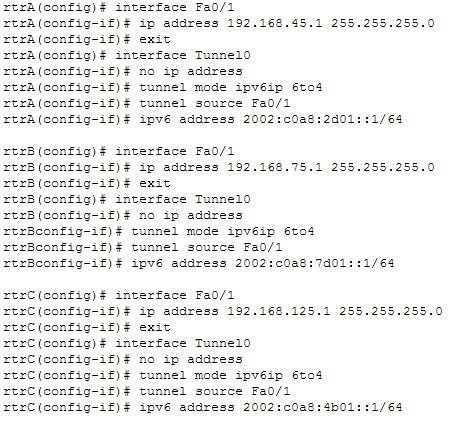 Your supervisor has assigned the task of verifying the automatic 6-to-4 tunnel to one of your colleagues.
Your colleague runs the show running-config command  and finds that incorrect IPv6 addresses have been assigned to the tunnel interfaces of the routers.
Which of the following IPv6 addresses should be assigned to rectify the problem? (Choose two.)

Question 4
An automatic IPv4-compatible IPv6 tunnel exists between two IPv6 networks. The two IPv6 networks belong to different BGP autonomous systems (AS). The tunnel source has the IPv4 address 172.168.111.65/24 and the tunnel destination has the IPv4 address 172.168.222.80/24. Which of the following statements is TRUE about the tunnel source and tunnel destination IPv6 addresses? (Choose two.)

Question 5
Which of the following statements are TRUE about manually configured IPV4-to-IP6 tunnels and GRE tunnels? (Choose two.)

Question 6
Which of the following IPv6/IPv4 interoperability techniques routes both IP versions simultaneously?

Correct Answer: B
When the routers in the network are capable of routing both IPv6 and IPv4 traffic, it is referred to as dual stack. The dual stack routers simply recognize the version a frame is using and react accordingly to each frame.
Network Address Translation- Port Translation (NAT-PT) is a service that runs on a router or server that converts IPv4 traffic to IPv6, and vice versa. This eliminates the need for the routers or clients to be dual stack-capable. When only one router exists between the IPv4 and the IPv6 networks, this will be the only option, since all other methods listed require a dual stack capable device on each end of the tunnel. The IPv6 to IPv4 mapping can be obtained by the host from a DNS server, or the mapping can be statically defined on the NAT device.
6to4 tunnels can be created between dual stack routers or between a dual stack router and a dual stack client. In either case, each tunnel endpoint will have both an IPv6 and an IPv4 address. When traffic needs to cross an area where IPv6 is not supported, the tunnel can be used to transport the IPv6 packet within an IPv4 frame. When the frame reaches the end of the tunnel, the IPv4 header is removed and the IPv6 frame is further routed based on its IPv6 address.
Teredo is an alternate tunneling mechanism that encapsulates the IPv6 frame in an IPv4 UDP packet. It has the added benefit of traversing a NAT device that is converting private IP addresses to public IP addresses. 6to4 tunnels cannot traverse NAT devices by converting private IP addresses to public IP addresses.
Objective:
Network
Principles Sub-
Objective:
Recognize proposed changes to the network
References:
Cisco > Home > Products and Services > Cisco IOS and NX-OS Software > Cisco IOS Technologies > IPV6 > Product Literature > White Papers > Federal
Agencies and the Transition to IPv6
Cisco > Cisco IOS IPv6 Configuration Guide, Release 15.2MT

Question 7
Which of the following statements represent characteristics of an automatic 6to4 tunnel through an IPv4 network? (Choose all that apply.)

Correct Answer: BCE
When implementing an automatic 6to4 tunnel, each IPv6 site receives a 48-bit prefix. The hexadecimal equivalent of the IPv4 address of the edge router is appended to 0x2002 and followed with the prefix to identify each end of the tunnel.
Each end of the tunnel must be a dual stack router, which is one that can route both IPv4 and IPv6 traffic. For example, if the edge router's IPv4 address were 192.168.99.1, the hexadecimal equivalent of the address (c0a8:6301) would be inserted between 0X2002 and the /48 prefix, resulting in a packet with the IPv6 address 2002:c0a8:6301::/48 to arrive at the tunnel endpoint address.
A Network Address Translation - Port Translation (NAT-PT) router performs translation from IPv4 to IPv6. It is not used in a 6to4 tunnel.
Each site does not have a /16 prefix with a 6to4 tunnel. Rather, each site has a /48 prefix.
The IPv6 address of each IPv6 host is not part of the site prefix. These addresses are retained within the IPv6 portion of the header, and will be read after the frame reaches the end of the tunnel for eventual IPv6 routing on the far end.
Objective:
Network
Principles Sub-
Objective:
Recognize proposed changes to the network
References:
Cisco > Products > Collateral > Whitepaper > Enterprise IPv6 Transition Strategy > IPv6 Deployment Solution Options

What possible reason(s) can cause the state of the first entry in the adjacency table? (Choose all that apply.)

Question 9
You have been alerted that TCP traffic leaving an interface has been reduced to near zero, while UDP traffic is steadily increasing at the same time.
What is this behavior called and what causes it?

Correct Answer: C
This behavior is called starvation and is caused by improper configuration of QoS queues. When TCP and UDP flows are assigned to the same QoS queue, they compete with one another. This is not a fair competition because the TCP packets will react to packet drops by throttling back TCP traffic, while UDP packets are oblivious to drops and will take up the slack created by the diminishing TCP traffic. The results from mixing UDP and TCP traffic in the same queue are:
Starvation
Latency
Lower throughput
While it is true that jitter can be caused by a lack of QoS, jitter is not what is being described in the scenario. Jitter is the variation in latency as measured in the variability over time of the packet latency across a network. This phenomenon seriously impacts time-sensitive traffic, such as VoIP, and can be prevented by placing this traffic in a high-priority QoS queue.
While latency can be caused by the maximum transmission unit (MTU) in the network, this is not a case of latency, although latency may be one of the perceived effects of starvation. Latency is the delay in reception of packets. The MTU is the largest packet size allowed to be transmitted, and an MTU that is set too large can result in latency.
While windowing can be caused by network congestion, this is not a case of windowing. This is a technique used to adjust the number of packets that can acknowledged at once by a receiving computer in a transmission. In times of congestion the window, or number of packets that can be acknowledged at a time, will be small. Later, when congestion goes down, the window size can be increased.
Objective:
Network
Principles Sub-
Objective:
Describe UDP operations
References:
Design Guide > Service Provider Quality of Service > CE Guidelines for Collapsing Enterprise Classes > Mixing TCP with UDP

Question 10
Refer to the following set of commands:

Which of the following statements is TRUE about the given set of commands?

Correct Answer: A
The correct answer is that IPv4 and IPv6 are running simultaneously on rtrA. The set of commands enables IPv6 on the rtrA router and assigns an IPv4 address and an IPv6 address to the Fa0/0 interface. This indicates that the router is a dual-stack router on which both IPv4 and IPv6 are running simultaneously.
The IPv4 address is not translated to the IPv6 address by the given set of commands because NAT-PT is not enabled on the router. To enable NAT-PT on a router, you need to use the ipv6 nat command. In addition, the ipv6 nat prefix command should be used to specify an IPv6 prefix.
The IPv6 address is not an IPv4-compatible address. IPv4-compatible IPv6 addresses are used in automatic IPv4-compatible IPv6 tunnels. These addresses refer to those IPv6 unicast addresses that have zeros in the first 96 bits and an IPv4 address in the last 32 bits. For example, 0:0:0:0:0:0:192.156.10.67 is an IPv4compatible IPv6 address where 192.156.10.67 is an IPv4 address. The IPv6 address (2001:0:1:1:D52::F3C/64), in this case, is not an IPv4-compatible IPv6 address.
A tunnel is not created for the interoperability of the IPv4 and IPv6 addresses because the given set of commands configures the router as a dual-stack router.
There are no commands for configuring a tunnel on the router.
Objective:
Network
Principles Sub-
Objective:
Recognize proposed changes to the network
References:
Cisco IOS IPv6 Configuration Guide, Release 12.4 > Implementing IPv6 Addressing and Basic Connectivity > Configuration Examples for Implementing IPv6
Addressing and Basic Connectivity > Example: Dual Protocol Stacks Configuration