The IPv6 router does not have 10.176.15.131 as its IPv4 address. The 10.176.15.131 address is the IPv4 equivalent of the second and third quarter (05B0:0F81) in the source IPv6 address.
The other two IPv4 addresses are incorrect as they pertain to neither of the two IPv6 hosts.
Objective:
Network Principles
Sub-Objective:
Recognize proposed changes to the network
References:
Cisco IOS IPv6 Implementation Guide > Implementing Tunneling for IPv6

Question 2
You have recently joined a company as the network administrator. You have been asked to complete the configuration on the border routers for an automatic 6-to-4 tunnel between several IPv6 network domains. The commands that are currently configured on the routers are as follows:
ipv6 route tunnel
interface tunnel
ipv6 address
tunnel source
Which of the following additional commands is required to complete the configuration of automatic 6-to-4 tunnel on the border routers?

Correct Answer: B
The correct answer is to use the tunnel mode ipv6ip 6to4 command to complete the configuration of an automatic 6-to-4 tunnel. This command requires the use of IPv6 unicast addresses that have the 2002::/16 prefix.
The types of tunneling mechanisms supported by IPv6 are:
Automatic 6-to-4 tunnel
ISATAP tunnel
Manually configured tunnel
GRE tunnel
Apart from using a tunneling mechanism, interoperability between IPv4 and IPv6 can be provided by using a dual-stack infrastructure or Network Address Translation-Protocol Translation (NAT-PT). A dual-stack infrastructure allows you to use both IPv4 and IPv6 addresses on the same router/host. NAT-PT is used to translate IPv4 addresses to IPv6 and vice versa.
The tunnel mode ipv6ip command should not be used to complete the configuration because this command specifies IPv6 as the passenger protocol and creates a manually configured tunnel.
The tunnel mode ipv6ip auto-tunnel command is not required to enable automatic 6-to-4 tunneling on the border routers. This command creates an automatic IPv4-compatible IPv6 tunnel between the routers.
The tunnel mode ipv6ip isatap command should not be used because this command creates an ISATAP tunnel.
Objective:
Network Principles
Sub-Objective:
Recognize proposed changes to the network
References:
Cisco IOS IPv6 Configuration Guide; Implementing Tunneling for IPv6 > Configuring Manual IPv6 Tunnels
Cisco > Cisco IOS IPv6 Command Reference > tunnel mode ipv6ip

Question 3
You have implemented IPv6 automatic 6-to-4 tunneling between three IPv6 subnets as shown in the network exhibit. (Click the Exhibit(s) button.)

You have used the following commands to implement the automatic 6-to-4 tunnel: 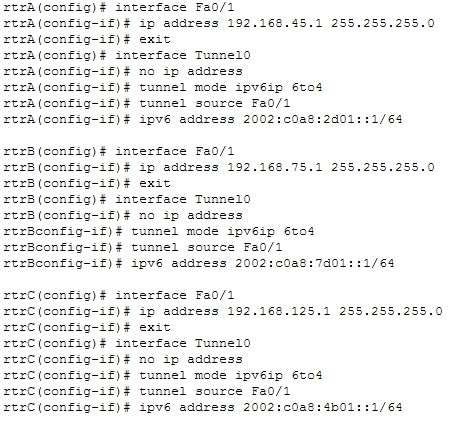 Your supervisor has assigned the task of verifying the automatic 6-to-4 tunnel to one of your colleagues. Your colleague runs the show running-config command and finds that incorrect IPv6 addresses have been assigned to the tunnel interfaces of the routers.
Which of the following IPv6 addresses should be assigned to rectify the problem? (Choose two.)

Question 4
An automatic IPv4-compatible IPv6 tunnel exists between two IPv6 networks. The two IPv6 networks belong to different BGP autonomous systems (AS). The tunnel source has the IPv4 address 172.168.111.65/24 and the tunnel destination has the IPv4 address 172.168.222.80/24.
Which of the following statements is TRUE about the tunnel source and tunnel destination IPv6 addresses? (Choose two.)

Question 5
Your company has implemented IPv6 addresses and routing on every host, server, and router. Recently, your company acquired another company that has an IPv4 addressing scheme for its entire network. The acquired company's network does not have any support for IPv6. You need to devise a method so that the IPv6 hosts in your company can seamlessly communicate with the IPv4 hosts of the acquired company's network. You do not want to install any additional routers, and you want minimum configuration changes on the networks. Which of the following is the best method to allow communication between the IPv4 and IPv6 hosts?

Question 6
Which of the following statements are TRUE about manually configured IPV4-to-IP6 tunnels and GRE tunnels?
(Choose two.)

Question 7
Which dialer interface command sets the maximum size of IP packets to 1492?

Which of the following statements is NOT true?

Correct Answer: C
The Forwarding Information Base (FIB) table is created when Cisco Express Forwarding (CEF) is enabled on the router. FIB is a mapping of destination networks and IP addresses to next-hop IP addresses and exit interfaces.
In the scenario, multicast routing has NOT enabled in the router. If it were enabled, the next hop for the 224.0.0.0/4 network would not be listed as drop. A drop means any packets sent to multicast IP addresses will be dropped. If multicast routing were enabled, the entry for 224.0.0.0 would appear as follows:
Prefix             Next Hop                Interface
224.0.0.0/4        0.0.0.0
The next hop of 0.0.0.0 means that this traffic will be process switched, and CEF cannot forward the packets.
The table displayed in the scenario contains the default entries in the FIB. These entries will change based on further configuration of the router interfaces and the addition of routes to the routing table through either static routing or through routing protocols.
No IP addresses have been configured on the router. Had they been configured, the addresses of the networks to which they were connected would be in the table. For example, if the IP address of the FastEthernet 0/1 interface were set to 192.168.1.1/24, three entries would have been added to the table as follows:

Question 9
Which of the following IPv6/IPv4 interoperability techniques routes both IP versions simultaneously?

Correct Answer: B
When the routers in the network are capable of routing both IPv6 and IPv4 traffic, it is referred to as dual stack.
The dual stack routers simply recognize the version a frame is using and react accordingly to each frame. Network Address Translation- Port Translation (NAT-PT) is a service that runs on a router or server that
converts IPv4 traffic to IPv6, and vice versa. This eliminates the need for the routers or clients to be dual stack-capable. When only one router exists between the IPv4 and the IPv6 networks, this will be the only option, since all other methods listed require a dual stack capable device on each end of the tunnel. The IPv6 to IPv4 mapping can be obtained by the host from a DNS server, or the mapping can be statically defined on the NAT device.
6to4 tunnels can be created between dual stack routers or between a dual stack router and a dual stack client.
In either case, each tunnel endpoint will have both an IPv6 and an IPv4 address. When traffic needs to cross an area where IPv6 is not supported, the tunnel can be used to transport the IPv6 packet within an IPv4 frame.
When the frame reaches the end of the tunnel, the IPv4 header is removed and the IPv6 frame is further routed based on its IPv6 address.
Teredo is an alternate tunneling mechanism that encapsulates the IPv6 frame in an IPv4 UDP packet. It has the added benefit of traversing a NAT device that is converting private IP addresses to public IP addresses.
6to4 tunnels cannot traverse NAT devices by converting private IP addresses to public IP addresses.
Objective:
Network Principles
Sub-Objective:
Recognize proposed changes to the network
References:
Cisco > Home > Products and Services > Cisco IOS and NX-OS Software > Cisco IOS Technologies > IPV6 >Product Literature > White Papers > Federal Agencies and the Transition to IPv6
Cisco > Cisco IOS IPv6 Configuration Guide, Release 15.2MT

Question 10
An enterprise has implemented an IPv4 addressing scheme on the servers of its core network. To effectively handle the increasing user requests to the server, the enterprise has plans to implement three new subnets with IPv6 addressing in its existing IPv4 network. The network administrator has set up dual-stack routers on the boundary of these subnets, as shown in the network diagram.

You need to ensure interoperability between IPv4 and IPv6 hosts such that routers A, B, and C can dynamically determine the destination of an IPv6 packet. In addition, global unicast addresses should be supported on all hosts in the three IPv6 subnets.
Which of the following tunneling method can be used between the three routers? (Choose two.)

Correct Answer: BC
You can use either automatic 6-to-4 tunnel or an Intra-site Automatic Tunnel Addressing Protocol (ISATAP) tunnel. Both of these tunneling methods are point-to-multipoint tunneling methods. This means that a single router (the point) can send IPv6 packets to different IPv6 routers (multipoints), depending on the destination address. When a router receives an IPv6 packet from an IPv6 host, it encapsulates the IPv6 packet in an IPv4 packet, which is then sent through the IPv4 core network. When the IPv4 packet is received at the destination router, the IPv6 address is extracted from the IPv4 packet and then forwarded to the intended IPv6 host.
Automatic 6-to-4 tunnels are created automatically by two IPv6 routers separated by an IPv4 network. These tunnels consider the IPv4 network as a virtual non-broadcast multi-access (NBMA) link. The tunnel is formed for every IPv6 packet that travels from one IPv6 border router to another IPv6 border router. IPv4 and IPv6 must be supported at both the border routers.
In automatic 6-to-4 tunneling, addresses belonging to the 2002::/16 prefix are used. In such IPv6 addresses, the 32-bit IPv4 address of each edge router is embedded into its IPv6 address increasing the length of the prefix to 48 (16 + 32). In automatic 6-to-4 tunnel, the IPv4 address of the router is embedded into the second the third quartet of the IPv6 address of the router.
ISATAP is also an automatic tunneling mechanism that uses an underlying IPv4 network as a NBMA link for IPv6 networks. However, it is most suitable for exchanging packets within an IPv6 network instead of exchanging packets between two IPv6 networks. With ISATAP tunnels, IPv6 dual-stack routers connected through the same IPv4 network can communicate with one another.
ISATAP works with unicast IPv6 addresses that are identified by a 64-bit prefix. The lowermost 64 bits are used to identify the interface of the router and are in modified EUI-64 format. The 0:5eFe value exists in the first 32 bits of the interface identifier. This value indicates that the IPv6 address is an ISATAP address. The remaining 32 bits contain the hexadecimal value of the IPv4 address; that is, the seventh and the eighth quartets in the IPv6 contain the IPv4 address.
You should not use a GRE tunnel or a manually configured tunnel between the three routers. These two tunneling methods provide static point-to-point tunnel between two IPv6 routers through an IPv4 network. Both these tunneling methods assume a virtual point-to-point link.
Objective:
Network Principles
Sub-Objective:
Recognize proposed changes to the network
References:
Cisco IPv6 Implementation Guide; Implementing Tunneling for IPv6