Question 1
You are the network administrator for your company and have configured Cisco Discovery Protocol (CDP) in your network. You recently noticed that when devices send large numbers of CDP neighbor announcements, some devices are crashing. You decide to disable CDP on the router.
Which command should you use to achieve the objective?

Question 2
Which is NOT a valid range for private IP addresses?

Question 3
Which of the following protocols allow the root switch location to be optimized per VLAN? (Choose all that apply.)

Question 4
Your assistant just finished configuring a small test network as part of his training. The network is configured as shown in the diagram below: 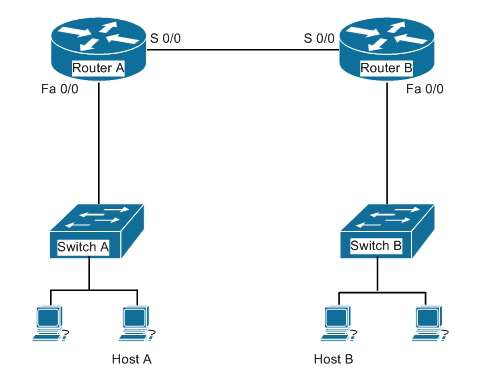 When testing the configuration, you find that Host A in the diagram cannot ping Host B.
Which of the following pairs of connections are required to be in the same subnet for Host A to be able to ping Host B? (Choose all that apply.)

Question 5
Click and drag the components on the left to their corresponding layers of the Open Systems Interconnection (OSI) model on the right.

Correct Answer: Exam simulator is required
File Transfer Protocol (FTP) and Telnet are services, which are implemented at the Application layer in the Open Systems Interconnection (OSI) model. The Application layer is responsible for interacting directly with the application. It provides application services, such as e-mail.
Motion Picture Experts Group (MPEG) and Tagged Image File Format (TIFF) are graphic image formats, which are implemented at the Presentation layer. The Presentation layer enables coding and conversion functions for application layer data. Data is formatted and encrypted at this layer. The Presentation layer converts data into a format which is acceptable to the Application layer.
The following are also OSI layers and their descriptions:
Session: Used to create, manage, and terminate sessions between communicating nodes. The Session layer handles the service requests and service responses which take place between different applications.
Transport: Responsible for error-free and sequential delivery of data. This layer is used to manage data transmission between devices, a process known as flow control. The Transport layer protocols are Transmission Control Protocol (TCP) and User Datagram Protocol (UDP).
Network: Used to define the network address or the Internet Protocol (IP) address, which is then used by the routers to make routing decisions.
Data Link: Ensures the reliable transmission of data across a network on the basis of Layer 2 addresses such as MAC addresses (Ethernet) or DLCIs (Frame relay).
Physical: Consists of hardware for sending and receiving data on a carrier. The protocols which work at the Physical layer include Fast Ethernet, RS232 and Asynchronous Transfer Mode (ATM).
Objective:
Network Fundamentals
Sub-Objective:
Compare and contrast OSI and TCP/IP models
References:
Internetworking Technology Handbook > Internetworking Basics > OSI Model and Communication Between Systems

Question 6
Which two fields are present in the output of the show ip interface brief command? (Choose two.)

Question 8
Which of the following accurately describes the purpose of a trunk?

Correct Answer: C
Trunk links are used between switches to allow communications between hosts that are in the same VLAN, but connected to different switches. Trunk links do not allow hosts in different VLANs to communicate, unless there is an additional trunk link connecting to a Layer 3 device, such as a router or a multilayer switch. Trunk links do allow a host in VLAN 10 on SwitchA to communicate with a host in VLAN 10 on SwitchB. Similarly, a host in VLAN 20 on SwitchA could also communicate with a host in VLAN 20 on SwitchB. A trunk link supports all VLANs by default, and frames that are not traveling on the native VLAN are "tagged" with the VLAN ID of the originating port before being sent over the trunk. The receiving switch reads the VLAN ID and forwards the frame to the appropriate host in the same VLAN.
The other options are incorrect because trunk links do not carry data for a single VLAN, nor are trunks used between switches and hosts (such as workstations and servers).
When a trunk link is extended to a router for the purpose of enabling routing between VLANs, the physical connection that the link connects to is usually subdivided logically into subinterfaces. Then each subinterface is given an IP address from the same subnet as the computers that reside on that VLAN. Finally, each computer in the VLAN will use the corresponding IP address on the matching subinterface of the router as its default gateway. In the example below, the switch has five VLANs created and some hosts connected to it. If hosts from different VLANs need to communicate, the link between the router and the switch must be a trunk link. 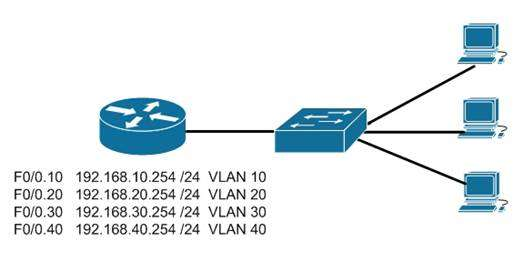 Furthermore, the physical link on the router must be subdivided into subinterfaces and addressed according to the legend shown for each subinterface in the diagram. For example, the configuration for VLAN 10 shown in the diagram would be as follows:
Router(config)# interface f0/0.10
Router(config-if)#encapsulation dot1q 10
Router(config-if)#ip address 192.168.10.254 255.255.255.0
Finally, each computer in VLAN 10 should have its default gateway set to 192.168.10.254.
Objective:
LAN Switching Fundamentals
Sub-Objective:
Describe and verify switching concepts

Question 9
Users on the LAN are unable to access the Internet. How would you correct the immediate problem? 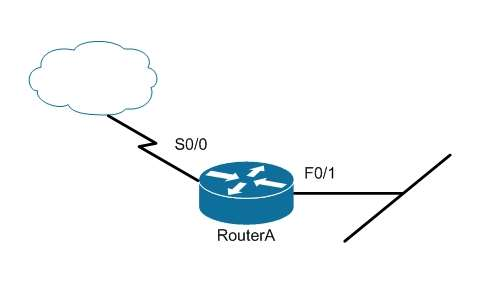 Correct Answer: B
The output indicates that the serial interface leading to the Internet is administratively down. All router interfaces are disabled by default due to the presence of a shutdown command in the running configuration. The no shutdown command removes this configuration, and the interface becomes active. The command sequence is:
Router(config)# interface serial0/0
Router(config-if)# no shutdown
Although it was not the problem in the scenario, the S0/0 interface could also cause an error if it is configured as shown in this output:
Interface IP-Address OK? Method Status Protocol
Serial0/0 200.16.4.25 YES NVRAM up down
In this example, the S0/0 interface has been enabled, and while there is Layer 1 connectivity (the Status column), Layer 2 is not functioning (the Protocol column). There are two possible reasons for this result:
Interface S0/0 is not receiving a clock signal from the CSU/DSU (if one is present).
The encapsulation type configured on S0/0 does not match the type configured on the other end of the link (if the other end is a router).
Configuring a bandwidth on the serial interface is incorrect because the output indicates the interface is administratively down, which does not pertain to bandwidth.
Configuring a private IP address on the Fastethernet0/0 LAN interface is incorrect because the output indicates the problem is with the disabled serial interface.
The IP address on the serial interface may or may not be valid, but it is not the immediate cause of the connectivity problem. The serial interface is disabled.
Objective:
LAN Switching Fundamentals
Sub-Objective:
Troubleshoot interface and cable issues (collisions, errors, duplex, speed)
References:
Cisco > Support > Administrative Commands > shutdown

Correct Answer: D
The show cdp neighbors detail command displays the IP address of the directly connected Cisco devices. CDP is a Layer 2 (Data Link layer) protocol that finds information about neighboring network devices. CDP does not use Network layer protocols to transmit information because it operates at the Data Link layer. For this reason, IP addresses need not even be configured on the interfaces for CDP to function. The only requirement is that the interfaces be enabled with the no shutdown command. An example of the output of the show cdp neighbors detail command is as follows: 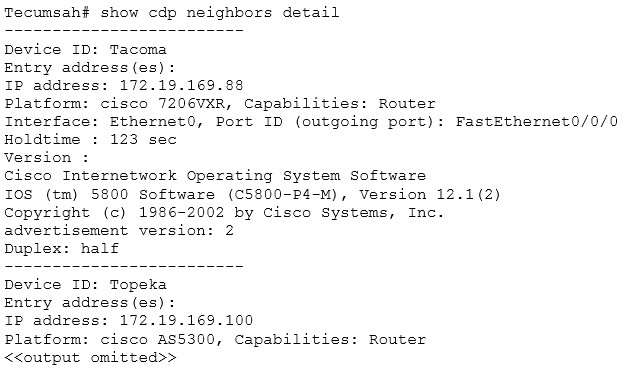